Ellery Queen is a unique fictional detective. Created by cousins Frederic Dannay and Manfred Lee as an entry in a writing contest, he is regarded by many as the definitive American whodunit celebrity, surpassing Nero Wolfe as the logical successor to the Master, Sherlock Holmes.

The cousins wrote dozens of books, and possibly hundreds of radio scripts, about the author and amateur sleuth who shared an apartment with his Dad, Inspector Richard Queen of the New York Police Homicide Squad. In the movies and on television, the EQ legacy was continued, though not always in a manner faithful to the authors' original conceptions.

Use the navigation menu in the upper right corner to learn more about Ellery Queen. Get overviews of the EQ writings as well as Ellery’s adventures in media; submenus delve into the EQ oeuvre in greater detail. If your interest is piqued, check the resources tab for a guide to the best EQ information in print and on the internet. 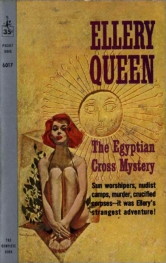